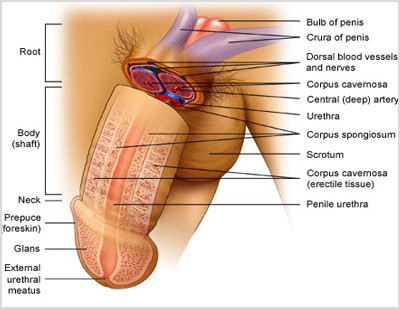 Is the Penis a Muscle?

Basic penis anatomy 101 isn’t exactly taught in school. You may learn about the reproductive system, but there are questions your teacher doesn’t know how to answer and would probably shy away from answering directly any way.

So is your  penis actually a muscle?

This is a question that has a strange answer. Technically, the penis isn’t a muscle, but it’s more of a half muscle.

It helps to have a better understanding of the entire anatomy of the penis.

The penis is a lot like a sponge. When you get an erection, this is a result of blood building up in two of the penis’ chambers. When these chambers fill with blood, the penis begins to swell and stiffen, leading to an erection.

Think about it for a second.

A flaccid penis doesn’t grow the instant a beautiful woman walks into the room. Blood flows into the penis, causing it to extend and get erect. Think of the penis like a balloon that’s inflated through your blood.

Under normal, non-erect circumstances, veins in the penis carry blood away from the penis.

The swelling that leads to an erect penis blocks the blood from exiting the veins that carry the blood away from the penis. After an erection subsides, the penis’ two chambers narrow, allowing the blood to drain from the penis.

What occurs is that the brain sends impulses to the penis, and this causes the muscles around the corpus cavernosum to relax.

Open spaces in the corpus cavernosum will begin to fill with blood. Pressure is placed against the penile material, causing it to expand. A muscle in the corpora cavernosa works to sustain the erection and allow a man to stay harder for longer.

Corpus Spongiosum is another spongy tissue that’s in the male urethra. The purpose of this tissue is the same as the corpus cavernosum. But this doesn’t mean that it doesn’t differ. These tissues play a major role in an erection, yet the role is to prevent the urethra from closing.

Without the corpus spongiosum, the urethra would close and not allow a man to ejaculate.

The corpus cavernosum fills with blood and is engorged. The corpus spongiosum remains pliable at this time so that the urethra remains open.

The penile shaft contains 3 erectile columns: the corpora cavernosa (2) and the corpus spongiosum. There are also fascial layers, lymphatics, nerves and blood vessels. There are two ligaments in the penis, too, that act as elastic fibers to help support the penis at the base.

The interior of these two layers is comprised of smooth muscle and fibrous tissue.

The deep penile fascia is a deep, strong layer that is continuous in the fascia of the muscles that come from the crura and bulb of the penis.

Penile skin is important, too. This skin continues to the lower abdominal wall, and also covers the glans. Connective tissue on the penis and scrotum consists of abundant smooth muscle that is called dartos fascia.

So, is the Penis Muscle?

People always say, “I want to make my penis bigger,” and since the penis is considered a muscle, men assume that the penis can be made bigger through the same techniques used to make other muscles grow.

The answer to this question is yes and no.

There are penile muscles that run along the penis, but the penis also consists of tissues, nerves and veins that function in conjunction with each other to help a man get an erection.

Facts About a Penis

Now that you know the penis is a type of muscle, it’s important to know a few other facts about the penis, too.

Can You Break Your Penis?

Yes. The penis doesn’t have bones, so it doesn’t break in the same sense as a leg or arm, but with a violent twist, the penis can break. The tubes inside the penis that fill with blood can burst when twisted violently.

Breaking a penis is rare.

Intercourse where a partner is on top of the man causes one-third of all penis breaks. Breakage occurs most often when the penis accidentally exists the women and bends violently against a partner.

A lot of men are too embarrassed to seek medical attention for a broken penis. Experts suggest that this rare occurrence is likely more prevalent than what’s reported.

Can the Penis be Exercised?

If you want to make your penis bigger, it needs exercise. “Use it or lose it” is the motto, and the most important thing to remember when discussing your penis. The penis needs to maintain a healthy tone with smooth muscle.

If a man never gets erections during the day, the brain will send impulses to the penis to cause erections when you dream.

Men with this problem can use a penis extender or even a vacuum pump to force the blood into the penis so that it can maintain growth.

How To Make Your Penis Larger

Penile exercises exist, but if you were paying attention when reading the sections above, you know that these muscles have more to do with stamina and erect hardness than the length of your penis.

A penis can be extended with the proper tools

SizeGenetics, for example, is a penis extender that works because of the way it’s designed. The results will blow you away.

This extender works by:

Over time, these tissues will grow in length and expand. The expansion allows the penis to offer more length when erect. Since the tissue is expanded, more blood can enter the penis and be trapped by the tissue.

SizeGenetics will help through the process of exercising the penis so that you can have a bigger penis.

The muscle will provide the additional support and control you need to “work” with your new, bigger penis. Your penis will slowly start to get bigger, thicker and harder. You’ll be working on a three-prong approach that works to:

More smooth muscle cells will grow through the use of a proper extension or “exercise” program. Even if the tissue in the penis is responsible for soaking up the blood, swelling and getting an erection, the muscle needs to also grow so that you can maintain an erection.

The penis is very complex.

What most men don’t realize is that the penis isn’t a bone at all. The penis is supported, and tissues, nerves and arteries help the penis function. Even the smooth muscle plays an important role in the function of the penis.

Daily exercise or stretches of the penile tissue and muscle will play a role in penis enlargement.